I’ve always loved I Love Lucy—who doesn’t?—and finally, I was able to chase my obsession with the show and its iconic characters by writing a one-woman show about Vivian Vance, who of course played Ethel Mertz. She was one of the most popular and iconic characters ever on TV, but her personal life couldn’t have been more different. Or fascinating. Or dramatic. She was ripe for a play of her own. So I was thrilled to be able to see my play come to life in the summer of 2019 at the wonderful Cape May Stage in Cape May, NJ. Artistic director Roy Bennett Steinberg directed it beautifully, and the one and only Sally Mayes, a Tony nominee and cabaret/concert star, brought Vivian to life in a way I never could have imagined. The play went on to become the most successful production in Cape May Stage history!

Further productions are in the works. If you’re interested in taking a look at the script for licensing, please contact me at kim@kimpowersbooks.com. 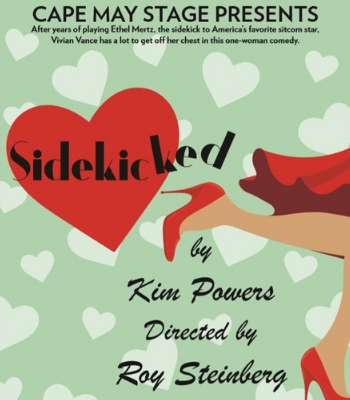 It’s Friday night, March 2, 1960, and Vivian Vance is about to turn herself into Ethel Mertz, America’s most beloved neighbor, for the very last time. After some nine years, I Love Lucy–and the subsequent The Lucy/Desi Comedy Hour–is coming to an end.

As Vivian gets into character and costume in her bungalow dressing room, 90 minutes before the final filming, she’s faced with a huge dilemma: Desi Arnaz wants her to stay on and do a new-fangled thing called a spin-off: Fred and Ethel. Just one problem. By now, Vivian Vance has grown to hate Ethel. And she definitely hates Fred. What to do? Stick with what’s made her rich and famous–or try something else. But can she even PLAY anyone else anymore? What if IT happens again? “It”–the darkest period of her life. A paralyzing nervous breakdown she had early in her career, while performing John Van Druten’s The Voice of the Turtle. It’s the thing that would ultimately lead to her being discovered to play Ethel–the biggest success in her life, and the very thing she wonders if she can ever live without.

Talking to her longtime analyst–an unseen presence in her dressing room–she revisits her life, trying to figure out how she got to this place in time. Her Bible-thumping mother who convinced her she’d go to Hell for wanting to be an actress; her philandering father; her two marriages and divorces before the age of 23; and her third marriage during I Love Lucy to an actor who physically abused her, causing her to have to disguise her black and blue marks with make-up. And most of all, her love/hate relationship with the one and only Lucille Ball.

The play is a tour-de-force that will take Vivian, and the audience, through the heights of hilarity and heartbreak. It’s about the woman we all think we know—but whose real life couldn’t have been more unlike the worn-out, housecoat wearing Ethel, sidekick to the star. Along the way, we begin to see Vivian as an early television pioneer–standing up for her rights long before the word feminism, speaking out about mental health, and surviving in the studio system, decades before #metoo.