Rules for Being Dead

It’s the late 1960s in small-town McKinney, Texas. At the downtown theater and the local drive-in, movies—James Bond, My Fair Lady, Alfie, and Dr. Zhivago—feed the dreams and obsessions of a ten-year-old Clarke who loves Audrey, Elvis, his family, serial killers, Truman Capote, and the handsome boy in the projector booth. Then Clarke loses his beloved mother, and no one will tell him how she died. No one will tell HER either. She is floating above the trees and movie screens of McKinney, trapped between life and death, searching for a glimpse of her final moments on this earth. The shattering answer haunts Rules for Being Dead, Kim Powers’ darkly humorous, incredibly moving novel, reminiscent of The Lovely Bones and The Curious Incident of the Dog in the Night-time, with a nod to Larry McMurtry’s iconic The Last Picture Show.

“Kim Powers has created an unforgettable story about discovering the world through movies, engaging with the tougher realities of life, and learning to forgive the people around us and ourselves.”
—Will Schwalbe, New York Times bestselling author of The End of Your Life Book Club 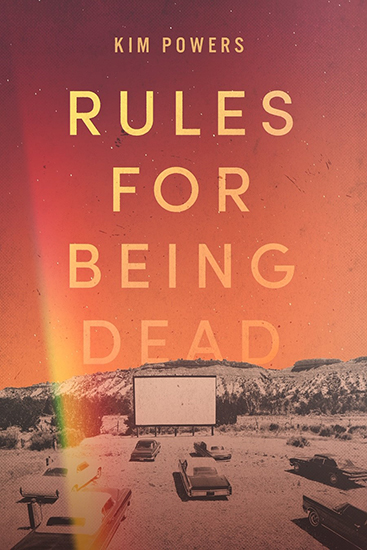 “Secrets are revealed, hope is lost and found, and redemption awaits in this beautifully rendered tale about love and loss, and the courage to face the truth with an open heart.”
—Adriana Trigiani, New York Times bestselling author of Tony’s Wife

“The narrative is laced with nostalgic references that bring to life a forgotten time. All these elements come together to create a vibrant backdrop to the story of one family’s unexpected loss and journey toward healing.”
—John Searles, bestselling author of Help For the Haunted and Strange But True

“I love the wicked humor and unexpected tenderness… The results are intriguing and unpredictable.”
—Robin Miura, senior editor, Blair

Family photos that come to life in Rules for Being Dead 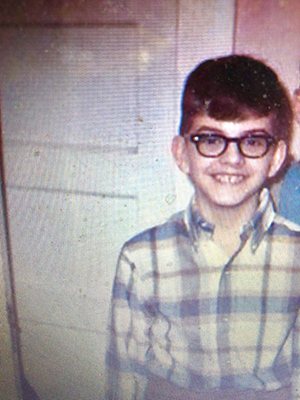 The dread first pair of glasses I had to get–the ones that turned me into a little Sherlock Holmes,
investigating my mother’s death. 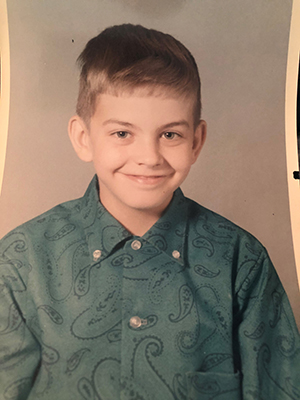 My favorite paisley “mod” shirt–and my perpetual close-mouthed smile,
to hide the gap between my two front teeth. 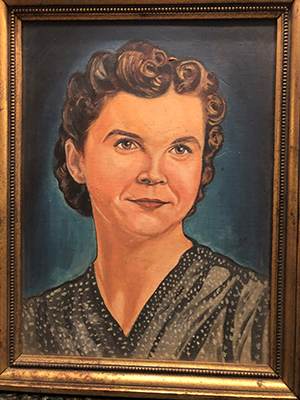 The portrait my father had painted of my mother,
that haunted me so because her eyes seemed to follow me everywhere. 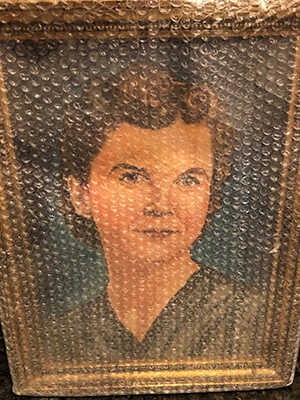 That same portrait covered in bubble wrap–an apt metaphor for Rules For Being Dead. 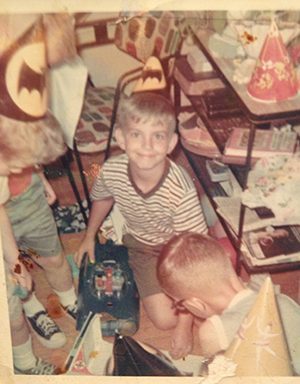 My first birthday party after my mother died– when I got a Batmobile AND my beloved Secret Agent Man Attache. 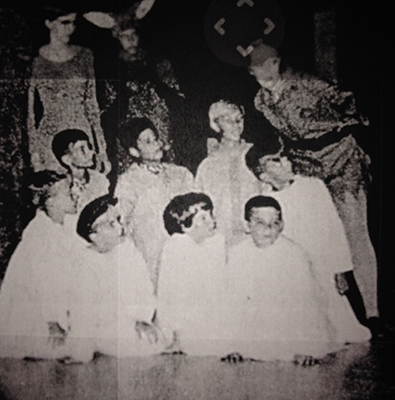 The community theater production of Peter Pan I was in, playing Michael—
during which I had a “vision” of how my father killed my mother.
(I’m the one directly below Peter Pan, twisting up to look at him/her.) 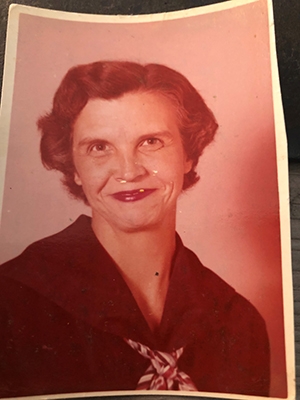 One of my Mother’s last schoolroom photos. 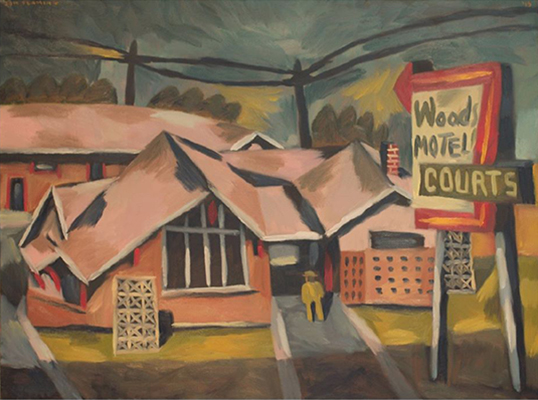 A rendering of the infamous Woods Motel–where so many scenes in the book take place.
The work of brilliant artist Jon Flaming, whom I call the “Edward Hopper of Texas.”
You can see more of his works here. 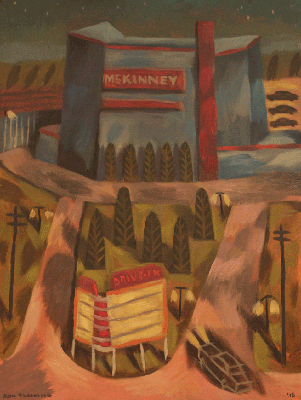 More brilliance by Jon Flaming–this painting of the McKinney Drive-In.
I discovered Jon’s work after I wrote the book but it was as if he had a laser beam into my mind,
or at least the mind of the ten-year-old version of me. 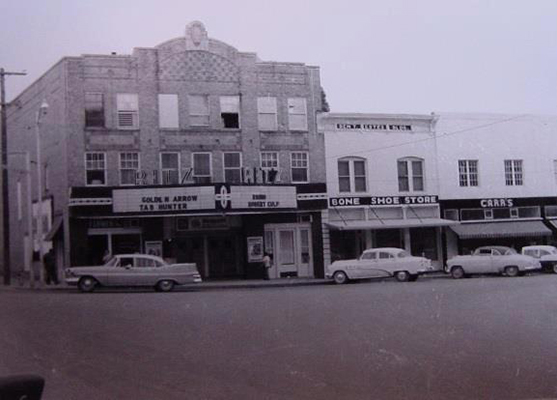 The exterior of the Ritz movie theater, years before the events of my book.
But you can get “the last picture show” vibe of a small Texas town from it. 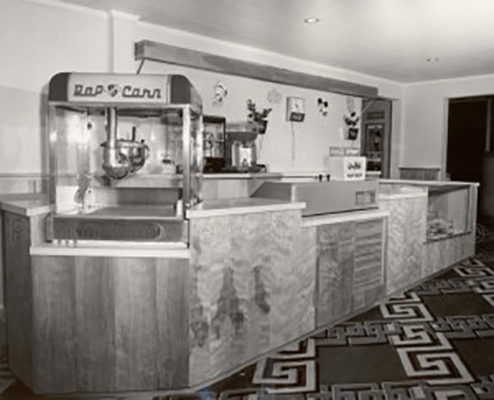 The refreshment stand inside the Ritz–I’d load up on popcorn and a giant Coke before the movie started.

“A son and the ghost of his mother share narrative duties as they both try to solve the puzzle of her death in Powers’s evocative coming-of-age tale set in 1960s Texas…. Woven throughout are threads of nostalgia in the form of classic ’60s films and television programs. The story really begins to churn when the characters’ intentions and histories are revealed. Blending late-’60s nostalgia with a supernatural mystery, Powers’s emotionally complex tale gets the job done just right.”
—Publishers Weekly

“In a story that’s both cagey and unfailingly entertaining, Powers explores life’s deepest questions and most profound mysteries. Only a writer this in touch with his own humanity could populate a novel with characters who, despite their flaws, failures, and eccentricities, are humane and good.”
—Wally Lamb, author of I Know This Much Is True and She’s Come Undone

“Kim Powers writes a glorious novel about a boy and his journey to feel whole after the mysterious death of his mother. Mr. Powers prose is artful and searing as Clarke’s story unfolds in a Texas town so vivid, the reader is there. Secrets are revealed, hope is lost and found, and redemption awaits in this beautifully rendered tale about love and loss, and the courage to face the truth with an open heart.”
—Adriana Trigiani, New York Times bestselling author of Tony’s Wife

“A tour de force in voice and structure, this uniquely heartbreaking novel—literary fiction meets boy detective—is somehow adorable and sinister at the same time. A sweetly naive boy, in grief and confusion over the death of his mother, is determined to discover how she died—and so is his mom, who watches over him from above. The brilliantly talented Kim Powers has created a poignant and remarkable story.”
—Hank Phillippi Ryan, Mary Higgins Clark, Anthony and five-time Agatha Award Winner

“Tender-hearted and touching, Rules for Being Dead is imbued with the imagination and emotion of such beloved books as The Lovely Bones and Ellen Foster. The narrative is laced with nostalgic references (from Elvis movies to mentions of Don Knotts and TV shows like Family Affair) that bring to life a forgotten time. All these elements come together to create a vibrant backdrop to the story of one family’s unexpected loss and journey toward healing.”
—John Searles, bestselling author of Help For the Haunted and Strange But True

“Rules for Being Dead is a rich and compelling novel about a mother and her sons that is filled with nostalgia, heartbreak, and a love that will never die. Kim Powers has created an unforgettable story about discovering the world through movies, engaging with the tougher realities of life, and learning to forgive the people around us and ourselves.”
—Will Schwalbe, New York Times bestselling author of The End of Your Life Book Club and Books for Living

“It’s time well spent with the Perkins family, though the father should be locked up, one son should be disarmed, and the mother who might fix everything can’t—because unfortunately she’s a ghost. Unorthodox, quirky, funny and heartbreaking, Powers’ love letter to difficult families (and 1960s film classics!) is a blast.”
—Wilton Barnhardt, best-selling author of Lookaway, Lookaway

“We all know a few rules about being alive but who knew that the after-life could command equal attention. Kim Powers’ Rules for Being Dead caught me by surprise with its intrigue, wit and nostalgia around a subject that many of us would rather avoid. His incredibly moving novel takes you back home—no matter where, or when, you grew up. It reminds us that mothers and fathers can never be as perfect as we want them to be, and that childhood secrets can still haunt into adulthood. Get ready to be captivated by a lonely boy who’s lost in the world of ‘60s movies and true crime and employs both of them to try to solve the ultimate mystery: what caused his mother’s mysterious death? And one more thing? Despite its title, this book is about learning how to live, with every breath you take.”
—Deborah Roberts, ABC News Correspondent and author of Been There Done That: Family Wisdom for Modern Times

“I love the wicked humor and unexpected tenderness that memoirist and television writer Kim Powers brings to this small-town Texas novel. It reads like a combination of Siebold’s Lovely Bones and McMurtry’s Last Picture Show with a touch of Childress’s Crazy in Alabama. The young protagonist—clever, gay, and obsessed with movies—searches for the cause of his mother’s death, a mystery that parallels events in Powers’s own life. The results are intriguing and unpredictable.”
—Robin Miura, senior editor, Blair

We use cookies to ensure that we give you the best experience on our website. If you continue to use this site we will assume that you are happy with it.OK