“Before you embark on a journey
of revenge, dig two graves.”
—Confucius

In his twenties, Ethan Holt won the decathlon at the Olympics and was jokingly nicknamed “Hercules”; now, in his late thirties, he’s returned to his ivy-covered alma mater to teach, and to raise his young daughter Skip as a single father. After a hushed-up scandal over his Olympics win and the death of his wife in a car accident five years ago, Ethan wants nothing more than to forget his past. Skip is not only the light of Ethan’s life—she is his life. Then, Skip is kidnapped.

A series of bizarre ransom demands start coming in that stretch Ethan’s athletic prowess to its limits, and he realizes with growing horror that they are modern versions of the Twelve Labors of Hercules, demanded in tricky, rhyming clues by someone who seems to have followed every step of Ethan’s career. As images from Ethan’s childhood become an onslaught in his mind, he finally comes face to face, literally, with the secrets of his past and understands who the kidnapper is. Drawn to the arena of their final showdown, the Twelfth Labor—a cemetery where the dog Cerberus guards the gates of Hell—”Hercules” must do final battle with his nemesis one last time, to free his daughter, and solve the mystery of the childhood that has haunted him all his life. 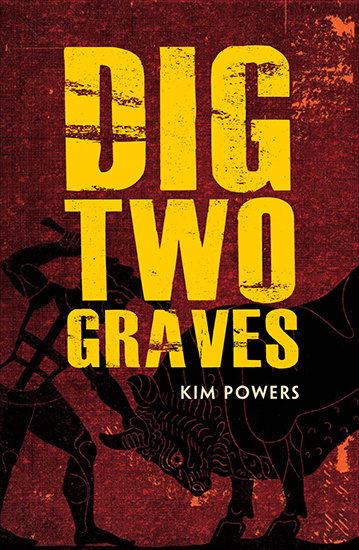 “A heart-tugging child-in-peril plot drives this thoughtful crime novel….Powers nicely depicts the pathos of Ethan’s situation…as the story progresses to a twist-filled resolution.”
—Publishers Weekly
“Connections to Greek mythology add a deeper element to the kidnapping plot… Enough adrenaline to please fans of Dan Brown and those who appreciate thrillers with literary roots.”
—Kirkus
“Powers has crafted an unusually lyrical mystery. Each character is sharply and precisely drawn; the language is carefully polished.”
—Library Journal

The Power of Writing
An arty TV shot I did—about how writing saved my life—before I “dug two graves”!
Watch video
Crimefiction.FM
Stephen Campbell asked all the right questions on his great mystery podcast CrimeFiction.FM—hopefully I gave the right answers!
Read about it and listen to the podcast

“Powers knows his business. Dig Two Graves has everything you would expect from a seasoned thriller pen: cliff hangers, surprises, twists, and red herrings. It has the kind of plot that makes a book hard to put down. Powers is adept at creating believable characters… everything necessary for an impressive debut. He uses the conventions of the thriller with intelligence…. One heck of a read.”
—Blogcritics

“Connections to Greek mythology add a deeper element to the kidnapping plot…and the eventual truth about the kidnapper is quite a shocking reveal…. Enough adrenaline to please fans of Dan Brown and those who appreciate thrillers with literary roots.”
—Kirkus Reviews

“Powers has crafted an unusually lyrical mystery. Each character is sharply and precisely drawn; the language is carefully polished. The denouement brings to mind the works of Scott Turow or John Lescroart.”
—Library Journal

“Kim Powers is a bright, new, intelligent voice in crime fiction. His characters are drawn with great empathy and understanding, and Dig Two Graves is a gripping, can’t-put-it-down read that will delight readers from the beginning to its satisfyingly twisty end. A must read!”
—Deborah Crombie, New York Times Bestselling author of To Dwell in Darkness

“In Dig Two Graves, Kim Powers beautifully orchestrates an angst-ridden family drama that is based on one of the worst family nightmares: a kidnapped child. This is a tantalizing, expertly crafted suspense thriller.”
—Joseph Olshan, author of Cloudland, Clara’s Heart and Nightswimmer